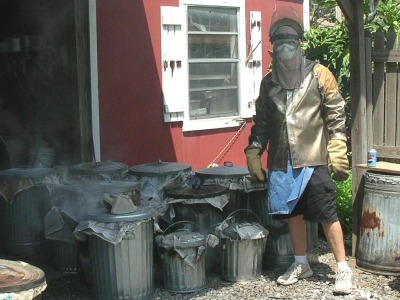 William K. Turner was born in Miami, Florida on August 25, 1951. At the age of twelve, he moved to Shreveport, LA and graduated from high school there in 1970. He attended Northeast Louisiana University, where he studied business management, then fine art, concentrating in ceramics. Mr. Turner moved to Tampa in 1974, to take a post as vice-president of C & F Wholesale Ceramics. In 1983, he received a Bachelor of Fine Arts from the University of South Florida, where he specialized in raku and salt-glaze firing. At the same time he began development of Kaleido-Tiles, 3-D ceramic tile patterns. In 1986, the USF Centre Gallery held a one-man show of the Kaleido-Tile Collection.

Mr. Turner refined his style of raku firing with Kaleido-Tiles, marketing them through Bayberry of Miami. This artist's work has been shown in several South Florida galleries. Mr. Turner has completed various commissioned works, including a large Kaleido-Tile piece for the Crystal Palace Hotel in Nassau, Bahamas.

In 1988, Mr. Turner developed an accessory line of slip-cast raku fired ceramics which he marketed to Fine Furniture and Interior Design stores. He showed the line at the High Point Furniture Market with Van Teal of Miami for two years. In 1991, William started Raku Art Inc. and marketed his work nationally through a network of manufacturer representatives. From 1993 to 2000, Mr. Turner returned to the High Point Furniture Market and had a showroom in the C & D Building. He was represented in Seattle by Alayne Grothen & Co., in the Gift Mart for 6 years. His work has been sold in Hudson's, Dayton's, and Marshall Field's Department Stores and in The Discovery Channel Stores. Mr. Turner's work has sold in over 100 fine furniture showrooms, gifts stores, galleries, and interior design stores throughout the states.

Mr. Turner is one of a few artist in the United States who produce copper matte raku fired ware year-round. He personally pulls every piece from the kiln and inspects each piece of Raku Art before it is signed and dated. The Copper Matte glaze used is one that he has formulated and worked with for many years. The finishes are all derived around this one raku glaze and a combination of special techniques. He achieves a wide range of colors and has perfected both light and dark raku finishes. William uses many unique shapes in his line that are the canvas for his Raku Art, painted with fire.